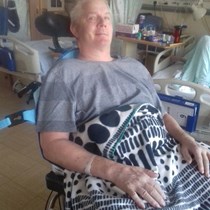 On September 17th 2016, Paul Curtis was involved in a very serious mountain bike accident which resulted in catastrophic, life changing injuries. Paul broke his neck, damaged his spinal cord, suffered paralysis to the right side of his diaphragm and lost use of part of his right lung. 18 months on, Paul is completely paralysed from the chest down and yet to return home. Since his accident, Paul has had to overcome endless major medical problems, but his incredible resilience has ensured that every challenge has been met with courage, determination and amazing strength of character. Following his accident, Paul spent 6 long and difficult month in University Hospital Wales, Cardiff, before being transferred to the Welsh Rehabilitation Centre at Rookwod, Llandaff, Cardiff in March 2017. He remained there until December 2017, when he moved to the Barchester Care Home (Awel Y Mor) in Gorseinon, Swansea where he will stay until the extensive adaptations to his home in nearby Penclawdd are completed. These adaptations are very costly but with the help of fundraising efforts, Paul will eventually return to a safe, comfortable, totally accessible home, to live with his family once again. Thank you for your support.