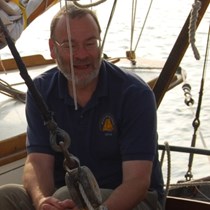 Our Campaign here end on 19th April, but we still have a long way to go.
We'll not give up, we believe we can at least move her away from chainsaws and bonfires, but not yet to a place where we can restore her.

The whole fund needs just one of the following or a combination of parts.

Tally Ho Is An Important Historic British Yacht, Designed n 1909 By The Great Albert Strange, But Is Threatened With Destruction If We can't Rescue Her --- by the end of June 2017

Depending on what we raise we have three options: "just move her", "move her to a more heritage friendly US East coast site", "Bring Her Home" to the UK. We're seeking support and funds in several ways.

Amongst Tally Ho's many achievements was winning the 1927 Fastnet Race in near storm conditions where only two yachts of the fleet managed to complete the race.

"...Tally Ho, working toward the Lizard under reefed main and spitfire jib. High though the seas rose, she seemed as steady as a church, and we watched her in silent admiration.
Here indeed was a competitor..."

And here indeed is a yacht worth saving.

That task of bringing her home makes significant demands on us. The estimate for the cost of doing that is around 30,000 pounds or dollars. That is far more that the ASA's current wealth. We are a just small association of like-minded enthusiasts and volunteers.

Our aim at this point is, if at all possible, to raise the funds to achieve that repatriation.

The Albert Strange Association was formed in 1978 as a not-for-profit organisation “To trace and preserve the designs and little ships of Albert Strange and to make a permanent record of his life and work”. I'm Gordon Scott, semi-retired electronics and software engineer.