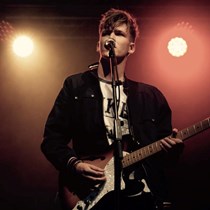 On February 13th this year River Reeves, 19, together with his three band mates from Viola Beach; Kris Leonard, 20, Tomas Lowe, 27 and Jack Dakin, 19 and their manager, Craig Tarry, 32 were killed in a car accident in Sweden. They were travelling home from their first international gig.

River lived with his mum and siblings in Penzance, Cornwall, before he moved to Warrington in 2007 to live with his dad and step mum, and where he went on to join Viola Beach.

Riv's Riders is a team of family and friends of River, who will be making the same journey, on our bikes... cycling from Penzance to Warrington, in September 2016 - to raise money for the River Reeves Foundation.

The River Reeves Foundation has been created to support young musicians and those involved in the performing arts, who need financial support to help them overcome the many barriers to fulfilling their dreams and which Viola Beach also faced in their too-short musical careers.
It is a hardship trust that can support all manner of personal causes linked to the performing arts and it is a fantastic legacy for River - who was an all-round performer from when he could walk and talk!
He would be incredibly proud to know this fund in his name will help ease the journey for others like him, and may well help create some more stars of the future.

Riv's Riders will be covering a distance of 410 miles, averaging approx. 75 miles per day (and around 5000ft daily climb), setting off from the Jubilee Pool in Penzance on Monday 19th September, planning to arrive at the Warrington phone boxes at lunchtime on Saturday 24th September (5.5 days total)

Please sponsor us by donating through this crowd-funding page. All donations will be collated by JustGiving and a cheque for the total will then be paid to the River Reeves Foundation.
All costs will be covered by the team - every penny donated goes to the charity.

Thank you in advance - your support means a huge amount to us.