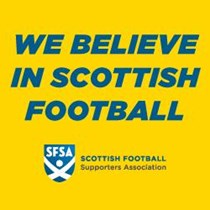 Weʼve raised £429 to Help ensure that our organisation can deliver better representation for fans & report on the benchmarking & evaluation of Scottish Football.

We have survived for two years being funded primarily by our co founders and by the generous donations of time and resource by a range of backers. The organisation has grown organically and is privileged to represent Scotland as members of Football Supporters Europe.

We are run by volunteers and will not accept funding from the football authorities as we are determined to be independent and have the ability to represent fans of all clubs. Scottish Football self regulates and the most important people - players, managers and supporters are not involved in any of the decision making. We believe that has to change.

Our initial campaign is using highly respected academics from Germany to help us evaluate and benchmark the performance of football's governing bodies. The research is open to everyone, players, coaches, managers, referees, administrators, journalists and of course supporters. If you care about the game we value your opinions.

We want to publish this data into a booklet, distribute widely, host a national event where we reveal the results and also produce a range of options to improve the game. We would also like to host around 10 roadshows around the country where we present the findings to fans. This has all been produced by people of many clubs about our game but to build on this and to ensure that Supporters are represented we need to do this every year . To do all of this and to grow the organisation we need funds to promote the fans issues at Hampden Park at Holyrood, Westminster and in Europe.

Donations will be used to pay for our expenses and campaigns. Thank you for taking the time to read this and for being involed.

We were established in 2015 funded by Simon Barrow a Dumbarton fan and Paul Goodwin a Jags fan as we sought to establish Scotland first independent national fans organisation. To deliver a professional on-going benchmarking & evaluation platform we need your help!