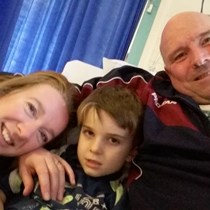 Samuel is just 5. As his parents it has been heart-breaking to witness the transformation caused by his brain tumour, diagnosed in November 2015. After being silent, pale, vulnerable and withdrawn for months he is starting to get back some of his former sparkling, sociable character. We are passionate about helping patients and families reduce and/or manage this kind of trauma.

Brain tumours wreck lives: - Around 9100 people per year (25 per day) are diagnosed with brain tumours in the UK alone, - The promising lives of approx 500 children per year under 10 in the UK, are being lost or severely affected by brain tumours, - Their families too will have their lives significantly disrupted, careers and livelihoods threatened, - Ironically though, diagnosis statistics & UK funding lag behind other medical spheres and so does understanding of brain tumours generally.

Samuel Bourdillon’s sparkling life has been turned upside down by a life-threatening, fist-sized brain tumour requiring two emergency operations. This was followed by a rare, little-understood condition known as posteria fossa syndrome. Samuel lost his speech, co-ordination, concentration and ability to walk. For Samuel diagnosis was fortuitous. Within days Samuel would have otherwise died.

Donations made so far:

Paul & Karen Bourdillon are the parents of Samuel Bourdillon (5) who was diagnosed in November 2015 with a large brain tumour growing from the brain stem. We have already raised £20k towards our grand target of £50k and would like to thank all who have supported us in any way!