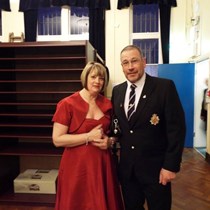 Hull Veterans Support Centre and Hull 4 Heroes were both formed to help Veterans of the Armed Forces in Hull and the surrounding areas. Run entirely by volunteers and surviving purely on donations, these two concerns deal with Veterans who are suffering, whether it be through homelessness, financial issues, unemployment, mental health problems, family issues or many other stresses that Service personnel deal with when they leave the Forces.

Terry Mitchell is now 54 and has carried out a major fundraiser for Veterans every year for the last 17 years but this year, his final swansong, he is walking from the Tomb of the Unknown Soldier in Westminster Abbey back to Hull, carrying everything he needs in a rucksack on his back.

He sets off on 27 June 2016 and will be arriving back into Hull on 2 July, where he will be met outside St Stephens Shopping Centre on Ferensway by several dignitaries, the Police band, standard bearers, Veterans and members of the public.