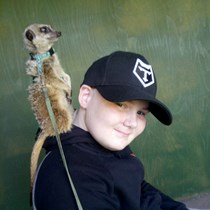 Weʼve raised £12,477 to Help us get Tyler to America for advanced treatment. Join Tyler's Fight, Club.

The third rule is our fight is not over untill it is won by Tyler.

Fourth, we will try to attend each fundraising event.

Fifth, so only one event at a time, fellas.

Sixth, Shirts are hopefully in the pipeline.

Seventh, fundraising events will go on for as is needed.

Eighth, if you have an idea for a fundraiser you MUST let me know it :)

And the ninth and final rule is

....every penny that is donated and not used for Tyler's cause will be split between SuperJosh and Max in a Million charities.

Here is Tyler's fight so far

In January, after 12 years of battling with Grade 1 & 2 brain tumors, Tyler was rushed into hospital and underwent an emergency biopsy, which delivered us another blow and diagnosed him with Grade 4 tumors located in his brain stem.
He underwent an intense five week course of daily Radiotherapy, Chemotherapy and steroids, to shrink the tumors and hopefully stabilize them.
The problem is that without surgery there is a very high possibility that they will grow again and treatment for these types of tumors is difficult.
The NHS have ruled out surgery, as they say it is risk to his quality of life, but instead of throwing in the towel we have been in talks with numerous doctors in America and we are trying to take his fight abroad where technique and treatment is more advanced.
Myself and some very precious people close to my family will be organizing fundraising events that can be attended, sponsored or just observed from between the ropes.
It is up to you but every penny given will go towards helping Tyler come at this thing with iron fists.
We are hoping for a knock out!!!!
Any donations or sponsers can be given by a crowdfunding page