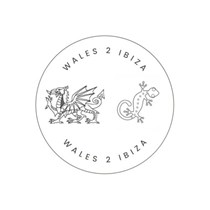 Weʼre raising £12,500 to boost awareness of the impact cancer and bereavement can have on loved ones. Raising money for Cancer Research, TNN and Glanwydden Trust.

Since August 1997, a small village on the North East Coast in Ibiza known as Cala Pada became the second home for my family as the destination for the annual holiday. I was seven years old when I first went, and as I grew up, I explored the island with friends who came out to stay with my parents. My Mum and Dad made great friends with locals of the island and were invited to weddings, christenings and celebrated their own anniversary each year that went by. Since 1997, my Mum and Dad only missed 2 summers. The first being in 2008, when my Mum was diagnosed with a form of lung cancer, she received treatment and it was a testing time, but as ever, showed determination to recover after having a third of her lung removed. In 2010, my Mum was diagnosed with a second bout of cancer in the womb, she had a hysterectomy and recovered to show off her scars on the beach of Cala Pada. As COVID19 struck the world, it was clear that the summer of 2020 my Mum and Dad would be missing their summer trip for only the second time in 23 years. However, as all trips abroad were being cancelled, in April 2020, my Mum was diagnosed with a third bout of cancer in her spine. It was detrimental to her physical capabilities following an unsuccessful operation, she was confined to a wheel chair, but her wish was to spend her 40th wedding anniversary with my Dad in Ibiza in the July of 2021. We set out plans and wanted to grant my Mums wish, however the worst was yet to hit us. In August 2020, my Mum was diagnosed as terminal, she was given 3 months to live and we witnessed the demise of a women loved and respected by so many. My Mum passed away on 26th December 2020 at the age of 59. I arrived at the hospital by bike, and left by bike, 32 miles I will never forget. The brain processing what has happened much more efficiently whilst my legs turn the pedals.

Throughout the time in 2020 my Mum battled against this awful disease, she was adamant it would have no impact on my life and I was to continue with work and ride my bike. Respecting her wishes, I did my very best. Working and supporting pupils in my school allowed me to focus on others but put my own well-being to the back of my mind. Whilst riding my bike did help, the friends I was riding with was the most significant aid I could have had throughout and I am forever grateful to them for their ongoing support.

COVID travel restrictions put a stop to Dad and I visiting Ibiza to spread my Mums ashes in July 2021 for their 40th wedding anniversary. We decided we would wait until summer 2022. An idea over a drink in the pub with Josh escalated to plans to ride home from home, Glanwydden, North Wales, to Cala Pada, Ibiza to spread my Mums ashes. Josh, also known as ‘son’ to my Mum, set up the idea to ride in her memory. It will require skills, attitudes and characteristics which she promoted throughout her hardest days with a smile on her face. It is also testament to the significance of riding a bike with good friends and the positive impact it can have on personal wellbeing and mental health for those who are affected by bereavement. As a result, we will be raising money in aid of Cancer Research UK and Mind Cymru with this self-supported ride.

The Glanwydden Community Trust have been incredible in supporting the fundraising attempt and following on from successful planning, we have now set plans to make Glanwydden and Cala Pada twin villages! Exciting times ahead and something my Mum would have been overjoyed with.