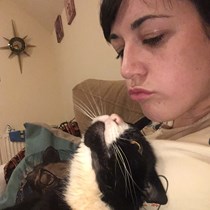 On the 16th August 2016, Whoopi disappeared. We spent weeks looking for her, putting up posters, posting flyers, speaking to neighbours and going out nightly trying to find her.

I had given up looking for her and moved house when I unexpectedly got a call from a kind missing animal charity worker who ran the Facebook group Whoopi was posted on. This was 7 months after Whoopi went missing. She had been found by 2 kind locals who had started to feed her; she was living under the steps of an abandoned building the road just behind where we used to live. A filthy, muddy hole full of rubbish had become her home.

She had her leg caught in her collar so the locals called Cat's Protection. They managed to get the collar off her but left her where she was, apparently making no attempt to catch her. The RSPCA were also contacted but they said they were unable to take her so, again, she was left where she was.

I went down to try to get her out as the neighbours had tried and failed as she was so petrified. I called her and she came straight to me for a stroke. I managed to pull her out and take her straight to the vet. She was filthy- covered in mud, rubble and smelling after living in her own filth for goodness knows how long.

The collar had worn away all the skin under her leg and it was raw and infected. Although Whoopi is back to her old silly, affectionate self, a month has passed and the wound is nowhere close to healing, despite regular visits to the vet, several courses of antibiotics and daily cleaning. She now needs surgery to help the wound heal and help her start to recover from her horrendous ordeal, but I have been given a quote of £400 which I just cannot afford.

Whoopi is like a baby to me and, after a long 7 months of missing her, it is a miracle that she came home. I need her back to full health so she can have a good quality of life but I cannot do this without your donations.

Please help my little Whoopi - she needs your support!

Whoopi was recently rescued and returned home after being missing for 7 months. Whoopi's leg was caught in her collar and she sustained an awful injury that will not heal; she now needs surgery which will cost £400. Please help my Whoopi recover and get back to her old self!