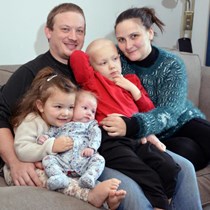 October 2016 started with excitement for 4 year old Zeke and his family, he was about to become a proud big brother for the second time. On the morning of his brothers birth, Zeke met him for the first time before heading off to school.

Later that day Zeke's parents received a phone call from school, Zeke was feeling unwell and unable to walk. From here they were straight to hospital having numerous tests. Over the following days the family received the devastating news that Zeke has stage 4 cancer and their lives were turned upside down.

His family have rallied around, barely seeing each other as they pass each other to look after the new baby, zeke in hospital and their sister who is still at home trying to adjust.

Zeke will still be going through gruelling chemotherapy until the new year in the hope to tackle the cancer to prevent it spreading further, and in all this time the whole family are pulling together and staying strong for each other.

We are raising funds to enable Zeke to create memories at either Legoland or Disney Land Paris which him and his family definitely deserve.