Faye’s music is a gift, don’t let cancer take it away…

Faye Fantarrow is an immensely talented singer/songwriter from the North East of England.

She was the winner of the Alan Hull award for song writing in 2021and was recently signed to Dave Stewart’s Bay Street Records label.

Faye has played The Mouth the Tyne festival, Stockton Calling and was booked to play Lindisfarne Festival as well as being named as a top tip for 2022 from BBC Introducing in the North East.

“Faye has something special, there’s a lightness of touch in the fusion of her melodies and lyrics that really appeals. I think she has a bright future and is a very worthy recipient of the Alan Hull Award” - Ray Laidlaw

Faye was just 8yrs old when her life as a carefree child ended.

Faye was diagnosed with Acute Lymphoblastic Leukaemia in September 2010, she underwent two and half years of invasive, gruelling chemotherapy that robbed her of her hair, her mobility and her childhood…but she fought

Faye was just 13years old when her life as a normal teenager ended.

Faye’s leukaemia returned in August 2015, this time Faye had to endure long stays in hospital fighting the infections her body was prone to because the chemotherapy and radiotherapy she had was designed to kill not only the cancer but to completely eradicate Faye’s own bone marrow, putting her at severe risk of succumbing to an infection at any time. Faye’s only hope was a bone marrow transplant…but she fought

In September this year, aged just 20, Faye started to feel unwell again. After visiting hopital and undergoing scans she was told her life was ending.

Faye was diagnosed with an aggressive Glioma brain tumour, believed to be a very rare consequence of the radiotherapy she had for her bone marrow transplant…there is no cure here in the UK…help her fight 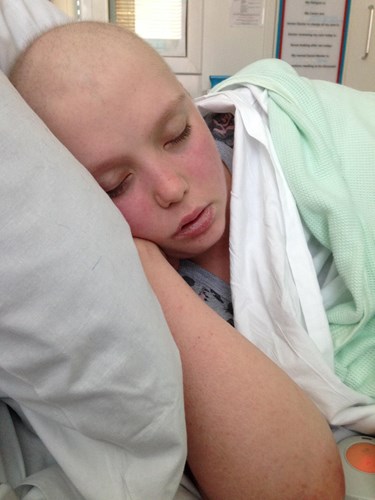 Faye has been accepted on a Cart cell trial to cure her cancer in California, USA but the cost is £450,000.

We cannot let Faye’s life end here… she is the brightest star you could ever find on the darkest night, she is strong, independent and talented…please donate …please help to help Faye fight

£450,000 is to cover the cost of the clinical trial at City of Hope hospital in Duarte, California along with medical procedures to enable the trial and subsequent medical care, hospital stays, scans and medication. Any amount raised surplus to medical costs will be used to fund travel, accommodation and living expenses for the duration of the trial.

The trial requires an initial visit to California for cell collection from Faye followed by an extended stay no sooner than 5 weeks later for 4-6 infusions of the cells back into Faye.

Funds raised in excess of these costs will be donated to cancer research charities.

If the full amount is not reached the funds raised will be used to partially fund the trial and Faye’s home will be sold to raise the shortfall. By donating to this cause you agree to these terms.