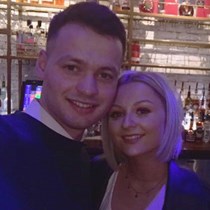 Weʼve raised £430 to Help ensure the work at the Holly Ward at the Woodlands Hospital can continue providing the best care for patients.

My Grandad had a fall in November 2018 which led him to be in hospital for a severely broken wrist. Since then it has come to light that he is and has been for some time, suffering from vascular dementia. Affecting his behavior making him very difficult to deal with and care for as he can have very aggressive outbursts, both verbal and physical. After having surgery on his wrist and moving from a long stint in Bolton Hospital and then to Wythenshawe Psychiatric Unit, until he finally arrived at the Holly Ward at the Woodlands Hospital. This ward have been amazing in caring for my grandad, understanding and meeting his needs. They have spent time getting to know him, finding out his likes and dislikes, what things make him angry, what makes him laugh etc and I can honestly say that after months of battling with different medications, places and treatments he is more himself now, following treatment and care at the Holly Ward than he has been in a long time. Not only have they helped my grandad, but have also taken a huge strain off the family that have been caring for him along the way, as until he arrived at the Holly Ward, he was not being cared for how his condition required and so the family have had to put a lot of time into making sure his needs are met at each different placement - including feeding him his meals as he is almost blind, late nights trying to settle him and long conversations to try and get him to cooperate with various medical professionals etc. Unfortunately he can not stay at the Holly Ward long term as they are only a treatment center and now they have found the correct treatment for him he will soon be moving to a long term nursing home. Me and my family are so thankful for everything the Holly Ward has done and how much they have helped my grandad and so we wanted to give back anything we could to show our great gratitude. On Sunday May 19th, I will be running the Chester Half Marathon for the ward to hopefully raise some money so they can continue helping adults suffering with debilitating mental health problems such as Dementia. Thank you for reading my story, any donations are greatly appreciated and will be a huge help.

I am running a half marathon on 19th May to raise funds for an amazing ward that have helped care for my grandad.