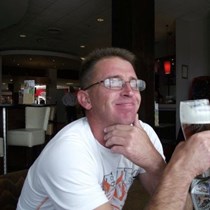 Weʼve raised £685 to This is to fund a funeral and the house improvements he failed to complete.

Carl Fussell was a very healthy and active 47 year old man. He passed away suddenly on the 29th September at 17.15. He died from an aneurysm which bleed severely. We first thought there was something wrong when he had a seizure whilst on holiday 2 weeks prior to his death. Unfortunately the hospital did not do a brain scan and the bleed was missed. When he came back he went straight to the doctors explaining everything that had happened and they did not send him for an emergency brain scan, only blood tests. He suffered with severe headaches for the week and a half leading up to being admitted to hospital but carried on like the trooper he was and kept working and kept making sure everything was running smoothly. He suffered another seizure Thursday morning and was admitted to PPH were he was later air lifted to the UHW. He kept fighting strong even though the odds were stacked heavily against him. He underwent an operation and everyone was told he was not going to pull through it but he did. He kept fighting but unfortunately his body didn't want to fight anymore and his brain swelled and unfortunately he passed away, leaving behind his loving wife and 3 children and grandchild. Whoever knew Carl they will know he was not a quitter and was very stubborn and even with his wife nagging him for years to pull life insurance out his standard response was, "I will do it when I have time." This response was his favorite when he was asked when will my house be done he would say the same, "I will do it when I have time." He made sure that everyone else was okay and if there was any jobs doing he would do them on their house first before his own. The only time he made sure he done work on the house was to try save money for example he done the foundations on the extension to make sure he didn't have to pay for more building regulations.

We are trying to crowdfund because as I stated above he did not have life insurance and we are trying to raise money for the funeral and extension to be completed. The support we have had as a family so far has been amazing and thank you to everyone for this. I really do appreciate the support and can not get over how everyone has pulled together to help the family at this difficult time.