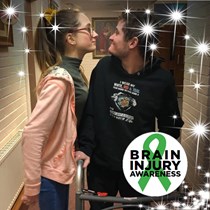 Adam was born in December 1998 and he was liked by many but in August 2014 Adam was out playing football with his friends, that night he took a almost critical Asthma Attack.

When Adam took his Asthma attack we are told to come a say our goodbyes because the doctors didn't not think that Adam would live, but he improved enough to be put into a induced coma. We have been told that he is a miracle and has proved to doctors wrong by First surviving the day of the Asthma attack and then surviving a week later when the doctors removed the ventilator.

After 2 months in Craigavon Area Hospital Adam got a Bed in RABIU in Musgrave Park Hospital, Belfast. Adam was also told by a consultant in RABIU that he wouldn't talk or walk again. Adam got his voice back in November 2014, he can't walk again yet but he determined. He attends physiotherapy 3 times a week, twice in school, Fleming Fulton in Belfast and once a week with a private physiotherapist.

He maybe disabled but hasn't lost his personalty. Adam loves to flirt, watch movies and listen to music. He also is a season ticket holder for the Belfast Giants who he loves to watch every time they are at home.

At the end of June, Adam is hopefully bring home his electric wheelchair from school if not he is getting a new wheelchair with a battery pack on the back.. We are fundraising for enough money to put a deposit on a wheelchair Accessible car and a ramp for the house to get the wheelchair in.

We have been told that the accessible car has to have a pulley system in the back and a battery pack box to store the wheelchair battery when Adam is the car for safety..

If you have any questions please ask and If you could help if will be greatly appreciated, thanks for reading.

Adam is 19 and has a Hypoxic Brain Injury with Secondary dystonia which was caused by an almost critical Asthma attack.