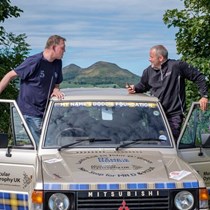 You will have perhaps seen or heard of the great work that my good friend Doddie Weir has been doing over the last year along with of course the amazing fundraising by many, who like us have been touched by Doddie's diagnosis. The My Name'5 Doddie Foundation, started by former Scotland rugby international Doddie Weir has just made it's first donation, more about that below. So we have chosen two hard hitting trusts to support during 2018, the other is Muscular Dystrophy UK. My own two daughters are soon to set away walking the West Highland Way (97 miles) aiming to finish on top of Ben Nevis. They have set a goal of four days so they also are doing their bit for both My Name`s Doddie and Muscular Dystrophy. Their cousin, my nephew, suffers from the condition so this again is a cause close to us all.

My Name'5 Doddie Foundation is to contribute £400,000 to support the work of Chris Shaw, Professor of Neurology and Neurogenetics, and his team at King's College London who are investigating gene therapy for Sporadic MND. Here at Adam Purves Mitsubishi we want to do our bit to help raise not only awareness but importantly raise money.

Doddie announced his diagnosis with the disease last year to raise awareness of the degenerative condition and pledged to devote his time to helping with research and supporting fellow sufferers. We want to do our bit by simply asking for donations.

Our first challenge is for Alister Scott, our Dealer Principal, and Doddie to drive from Lands’ End to John O'Groats to arrive back here in the Borders. Now for all of you who know this route you will say this is easy however we don’t do easy. Our route will take in key locations along the way, with our plan to drive non-stop but to take in as many visits as possible so if you are on our route please stop us and say hello. Once over the border we will then head through Glasgow & Edinburgh before heading north to Inverness, from here we will head west on the popular North Coast 500 route to take in Applecross then up to Durness and over to John O Groats before heading south to our finishing line at this years Border Union Show where our vehicle of choice will be on display as part of our trade stand. Our wheels for this road trip will of course be a Mitsubishi, our very own award winning MK1 Shogun so no creature comforts like air con or any other fancy driver aids.

Adam Purves Mitsubishi is a well respected family business based in the Scottish Borders, serving customers since 1879.