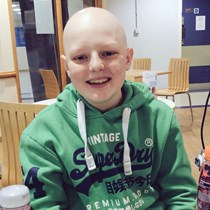 In December 2017, Adam was diagnosed with metastatic Ewing’s Sarcoma, a rare form of bone cancer which mainly affects children.

Prior to his diagnosis, Adam had experienced intermittent leg pain for a few weeks, but as an active and sporty 12 year-old, it was assumed to be related to a football injury. When the pain started to get worse his GP referred him for an X-ray. Further tests revealed that he had a tumour near the top of his right femur and that the highly aggressive cancer had already started spreading to his lungs.

Adam started cancer treatment in January 2018 at the John Radcliffe Children's Hospital in Oxford which included 14 cycles of chemotherapy and 35 sessions of radiotherapy over the following 9 months. He spent much of this time in hospital, he required the use of a wheelchair and suffered from the horrendous side effects of the cocktail of chemotherapy drugs. In August 2018, he underwent limb salvage surgery in which his diseased hip and proximal femur was replaced with a metal prosthesis.

For the next 5 years, Adam will have regular scans to make sure the cancer has not returned. As well as this ongoing uncertainty, Adam is faced with a physical disability as a result of his treatment. He is slowly rebuilding his strength to be able to walk again and is determined to be able to take part in sports and activities with his friends.

Your support will help to fund essential physiotherapy and specialist sports therapy sessions for Adam which are not available on the NHS. This treatment is not just vital for his physical development, but also hugely important for his emotional well-being, giving him a more positive future.