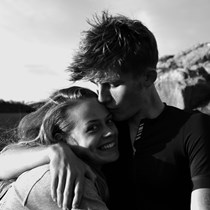 Weʼve raised £1,618 to help the Callum Wylie Foundation which aims to improve awareness and mental health provision for young adults with Asperger Syndrome.

‘The concept of everesting is fiendishly simple: Pick any hill, anywhere in the world and ride repeats of it in a single activity until you climb 8,848m – the equivalent height of Mt Everest’.

Aiden O’Leary: I live in North Wales, and I am a dedicated, some might say obsessive, road cyclist and mountain biker. The day after my eighteenth birthday back in February 2018, I attended the funeral of a friend and fellow mountain biker the same age as me, a brilliantly unconventional and extremely talented young man called Callum Wylie, who, despite his own incredible sporting abilities and achievements, ended up taking his own life. In addition to this particularly gruelling ‘Everesting’ challenge, I hope to acknowledge Callum’s experience with High Functioning Autism and extreme sports in my forthcoming Sport Science degree.

Callum Dixon: I met Aiden O’Leary through the local cycling fraternity and we compete together in the notoriously difficult niche category of hill climbing throughout the UK. Although I didn’t know Callum Wylie very well, I have many local connections to him and his family, and his story has made a very strong impact on me. I myself am a father to an adventurous young boy, and the thought of what Callum’s family have gone and are going through chills me to the core. I am currently doing a PGCE in secondary education, working with various individuals who are going through what Callum did, or similar.

Callum Wylie lived and breathed cycling, particularly mountain biking, and he was truly astonishing to witness in action; fearless and carefree on the infamous trails that he worked tirelessly with his friends to carve out through the woods above the village of Betws–y-Coed. Callum was also a gifted freestyle skier and musician, and his devoted parents, Charly and Kev, despite copious bodily fractures endured by their son, encouraged their boy’s passions, every step of the way. The thing is, Callum’s physical injuries were comparatively easy for him and for his family to endure in contrast to the mental turmoil and anguish that their beloved son had been trying to live with. You see Callum had Asperger Syndrome, and he evidently felt like a very square peg in the round hole of his impending adulthood. That notorious transition to maturity is difficult enough for neurotypical teenage brains to contend with, but for Callum, this transition, in the midst of lengthy injury rehabilitation, was clearly all too daunting, and, as we all know, the complete dearth of mental health/counselling provision for those aged eighteen and over these days is nothing short of a national disgrace.

Cycling is very much a lifeline for young people like us just trying to cope with the pressures of modern living, and we can’t imagine how difficult it must be to have to relinquish intensive training and/or competing in the event of injury rehabilitation with no valid safety net to catch us if we fall. Aiden himself took to road cycling at the end of 2016, a truly terrible year during which his father was diagnosed with a rare brain condition, one that ended up robbing him and his family of so very much. Cycling for Aiden is now an essential and integral part of his own identity.

Despite their best interventionist efforts at helping their son, Callum Wylie's parents were let down by an underfunded, inflexible, and unsympathetic system that could offer their child no help or counselling whatsoever as he had just turned eighteen and was technically classed as an adult. Charly and Kev are now wholly bereft of the joy of watching Callum actually become a man. In response to their son’s death, his parents Charly and Kev, along with his sister Bee, aim to establish a foundation in Callum’s name.

Aims of the Callum Wylie Foundation

To help raise awareness in schools, colleges or universities of the ‘hidden’ complexities faced by young people with Asperger Syndrome, those who are often so adept at masking their inner turmoil. Too often assumptions are made about autistic people coping, when they are actually struggling. We hope to design an experiential training programme, which will help more people to understand what it is like to be autistic but living in a neurotypical world. The Foundation will aim towards setting up a service to help vulnerable adolescents with Asperger Syndrome in times of crisis, understanding that communication difficulties prevent such young people asking for help themselves. Exercise was so key to Callum’s mental and physical wellbeing; the Foundation would like to enable autistic people to experience and enjoy sport, from those who might never otherwise have participated in sport at all, to those, like our son Callum, who know no limits and want to achieve to their full potential. In order to help raise funds for this foundation, Aiden O’Leary and Callum Dixon will attempt to ascend Marchlyn, just above Deiniolen in North Wales, approximately 34 times in a single continuous event until they have succeeded in ‘riding’ the equivalent of Everest.

“I consider myself to be extremely fortunate to have met and been able to ride with such a spirited individual as Callum Wylie, and I am confident that he would have approved of this apparent harebrained scheme wholeheartedly.” Aiden O’Leary .

Thank you for taking the time to read this and for your kindness, understanding, and generosity in donating. Aiden O & Callum D.