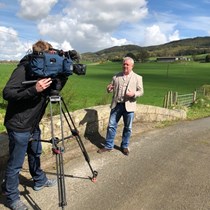 Weʼve raised £17,045 to The Great Betrayal” At present those who served their country in the war against the IRA feel betrayed , its time the truth was told

It is time the truth was told and we move away from the BBC and other media outlets being afraid to show the true and evil actions of the IRA. This program will not pull any punches, it will go into graphic detail about the true nature of the IRA and the evil acts of violence they committed upon men, women, and children. SF/IRA want the past actions of its terror gangs wiped from the history books.

The Great Betrayal will expose those who never faced prosecution and escaped justice. We will expose the myth of the words "freedom fighter" and show these cowards for what they really are, terrorist gangsters and thugs. We will have interviews with those who have never had justice and we will show how the Blair government sold the security forces out and betrayed the 300,000 veterans who served on Operation Banner.

No one wants the truth told, so instead of relying on our spineless media, let`s get the true facts on record and show the public who SF/IRA really are and why this great nation should reject the current one-sided and politically driven witch hunt.

Author and public speaker Alan Barry published his first book in 2015 he saw active service in Northern Ireland in the 1980s , he is the co founder of Justice for Northern Ireland Veterans www.justicefornivets.com