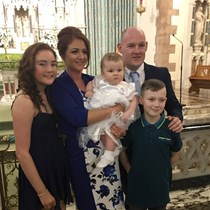 Weʼve raised £640 to Little Heartbeats who raises Awareness on PPROM in pregnancy & support families throughout See their website www.little-heartbeats.org.uk

Me & Sean are doing a sky dive in aid of Little Heartbeats to support all the work they do in supporting families through PPROM in pregnancy & helping save babies lives, some babies make it home and sadly some don't

This is a cause close to my heart ❤️

This is our families story here,

Jacki's waters broke on Monday 18th Jan at only 27 weeks, she was kept in overnight and given steroids to strengthen baby's lungs.

Few Days later on the Friday, she attended hospital for a check up and was told all was okay,

Then on Saturday she felt a wee bit different and I went to the hospital and they gave her a scan and they discovered no water surrounding baby and they confirmed Jacki had infection due to my waters breaking that could endanger her baby and her health so 2 doctors and registrar decided she needed emergency c section.

Jacki's baby boy was delivered weighing 3lb 1oz and put in incubator in ICU, The first 3 weeks he was in and out ICU 4 times as he wasn't feeding and temp kept going up and down.

Then on 13th February Jacki thought she was going to lose her little boy when she had phone call from hospital to come over asap,

When she got there her little boy was very ill with sepsis and was getting transferred to another hosp she was told he had a 50/50 chance of survival,from that moment Jacki stayed in the hospital day/night with her baby for the next 9 weeks during which he was transferred back and forwards between both hospitals, He had to be resuscitated 3 times.

The day came when Jacki was told he be coming home by the end of the week, they then discovered he had chronic lung disease and he would have to go home on oxygen.

Jacki brought home her baby home in April at 13 wks old this was one of the happiest days of our family life's.He has been in and out of hospital a couple of times with chest infections but other than that he is perfect. Our own little Miracle