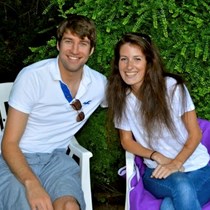 Weʼve raised £15,516 to pay tribute to the memory of Alan Lumley, who tragically passed away on the 3rd of April 2016 during the Wilmslow Half Marathon.

Alan tragically passed away on 3rd April 2016 whilst running the Wilmslow Half Marathon.

Alan was born in Warrington, grew up in Darlington and thereafter moved to Manchester. He went to Barnard Castle School and later studied Law at the University of Manchester and BPP Law School.

Alan was a talented solicitor working for DLA Piper and was recently shortlisted for two Young Lawyer of the Year awards.

Alan was an excellent sportsman; playing rugby league and union throughout school, both at county school-boy level. In recent years, Alan was a keen runner and had previously completed ten half marathon and 10K races. Running was a passion that he shared with his girlfriend of eight years Nicky Harris, who was also running the Half Marathon that day. Alan enjoyed playing golf was also an avid Liverpool FC and Warrington Wolves supporter.

Alan was the kindest and most loving son, brother and boyfriend that anyone could ever wish for. He was loyal, thoughtful and was liked and admired by everyone he met. Due to his sharp intellect and captivating personality he had established a successful career which showed great promise. He had been renovating his first home in Cheadle Hulme with Nicky and was looking forward to being an usher at sister Julia's wedding in eight weeks’ time.

Our lives have been shattered by the tragic loss of Alan on his 31st birthday. His memory will live on through us as we will celebrate his life the way he lived his - doing the things he loved with the people he loved.