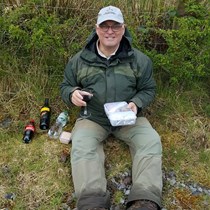 Since first entering the Commonwealth Fly Fishing Championships in Tasmania for the first time in 2012, the Northern Ireland Team have achieved notable success.

Third place out of sixteen teams in 2012 (Tasmania) and 2014 (Devon) and having individual runners up on both occasions and in 2016 (Canada) we achieved fourth place.

As you can see we are well up in the rankings in this competition but the cost personally to each of us has been significant so now we have established Northern Ireland on the Commonwealth Fly Fishing stage, we are now asking the people of Northern Ireland or elsewhere to help fund us and get behind us, so we can defend our GOLD status in New Zealand in March 2020.

Every little helps. So come on Norn Iron, support your Commonwealth Team!

Amature Fly Fisherman (when the wife lets me), Husband, Father & Grandfather, living in Co Antrim, Northern Ireland. I am so proud to be the Team Captain of the TAFI Northern Ireland Commonwealth Fly Fishing Team since 2012 and led them to four successive Championships..