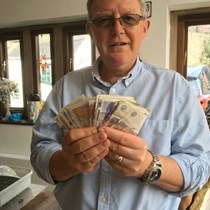 My wife and I moved into Crich at the end of 2017, having, between us, spent 21 years in the Nursing Profession, 17 years in the hospitality trade with a B&B in Matlock and serving 30 years in Derbyshire Fire & Rescue Service. Shortly before our move I was diagnosed with terminal Prostate Cancer, but I am determined to ‘Rage against the dying of the light’ for as long possible and the community here in Crich has been instrumental in helping with my mental and emotional state. Thank you.

Shortly before we left our B&B we had raised a considerable amount of money to put a Defibrillator on its outside wall, for use by everyone in Matlock and, of course, for the use of our guests...God forbid.

This fundraising was triggered by my Brother-in-Law’s brush with death. A few months prior to our fundraising activities he was playing badminton at Ripley Leisure Centre - fit as a fiddle, an outdoor, active worker - and he suffered a cardiac arrest - in other words he died, right there on the badminton court.

Now, someone up there must’ve been watching as, the day before, the leisure centre had taken delivery of a defibrillator. More than that, one of the staff members, 17 years old, had been trained in its use, also the day before. Quick as a flash the defibrillator was used and after a couple of shocks my Brother-in-Law was revived and his heart was kicked back into normal rhythm.

He spent sometime in hospital and had a stent fitted and now he’s back playing badminton. Without that defibrillator..?

So each night whilst walking the dog I saw the dilapidated state of our telephone kiosk and began to wonder whether it would be possible to raise money to put a defibrillator inside it.

Then I heard that Crich Parish Council, God bless-em, had bought three defibrillators and were assessing sites that they could be situated. Naturally I sat back, safe in the knowledge that one of them would find a natural home in the telephone kiosk. Unfortunately this did not happen and we now have; a defibrillator outside the Family Tree in Whatstandwell, one in the telephone kiosk in Fritchley and one outside the Glebe Field Centre. These are in addition to one outside the Fire Station and one at the Tramway Village (there’s also one in the Doctor’s surgery here in Crich but that’s only accessible during opening hours).

The placement of these defibrillators covers the vast majority of the village and I feel much safer knowing that they are around.

This left us back to square one with the telephone kiosk.

So, whilst on holiday towards the beginning of the year I found myself trawling t’internet to find some ideas to breathe new life into it.

If there are any interested parties out there like me (commonly known as nerds:-)) you will probably already know that there are numerous kiosks around the country that have seen a myriad of uses; book repository, flower bed, disco (honest), cake stall and one private owner has turned his into an aquarium!

However, one kiosk, in a village called Mellis in Suffolk really caught my eye. People from Mellis had got together and replaced all of the glass panels in the kiosk with stained-glass. Each panel represents a different community organisation from the village - stunning.

With our kiosk now being friendless I did some research and got in touch with it’s ‘owners’. I asked whether they would allow me to carry out such a refurbishment and after consulting the trustees of the organisation they agreed whole-heartedly.

During my conversation with the ‘owners’ it transpires that their primary function is to assist communities in raising funds for defibrillators! ...and they often fit them in telephone kiosks!

I couldn’t believe it...here was an opportunity to turn our unloved kiosk into a tourist attraction, to get all of our community groups involved and get a defibrillator fitted as a bonus - amazing.

The organisation in question is called the Community Heartbeat Trust and they are willing to fit a defibrillator, refit its self-closer and repaint the kiosk, giving it a shiny new suit.

I have to admit to a part of me wanting to leave a little legacy to this wonderful community of ours and Community Heartbeat Trust are right behind this - they want to help make some noise about these plans, and hopefully there’ll be something of a plaque on the kiosk with my name on it. Something that will last long after I’m gone, which, with treatment the way its developing, is hopefully some years away yet.

I think there’s also a possibility that Community Heartbeat Trust will fit the defibrillator and then let us raise the funds, rather than the other way around.

Our Comrade’s Club are also really supportive and my wife and I are planning some fundraising activities there - no firm plans yet but watch for the fliers. We used to be in a musical theatre group so we have lots of contacts.

I love this village.

If anyone would like to contribute to the fundraising then please follow this link to our JustGiving page.