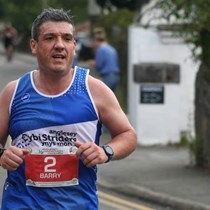 Having being diagnosed with cancer 5 years ago and having undergone surgery and Chemotherapy, Alaw Ward in Ysbyty Gwynedd, were fantastic and supported me through this difficult time. Now in remission 5 years on I want to be able to support the work they carry out each day for the people still undergoing cancer treatment.

I am going to run 12 half marathons in 2019. Having never run a in my life until the 16th of February 2017.
Two year later I never would of thought that I would run one half marathon let alone 12 in 12 months.
I will be taking on the following half marathons throughout 2019.

14th April- Coast to Coast half, Porth Eirias to Prestatyn.

19th May- Runwales, Snowdonia half.

8th December- Vale of Clwyd Half.