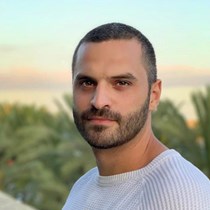 You can watch the recorded talk on Youtube: https://youtu.be/X9KhGMPHC18

You can also watch the original live-streaming of the talk on Twitch: https://www.twitch.tv/alececca88

From lesbians in ancient Greece, to gay love and gender fluidity in Bronze Age Iraq; from bisexuality in the Roman Empire, to transgender deities in ancient India and Pakistan; and more! Using objects from the National Museum Wales collection, we will embark on a journey as old as humanity itself to explore gender and sexuality in the ancient world.

The event is free, no registration is required. However, I hope you can help meet the £500 donation target for Glitter Cymru.

To watch the live-streamed Twitch event, just follow the link to donate and you will be able to watch it live from that page. You can also tune in via my Twitch channel here: https://www.twitch.tv/alececca88

In August, Glitter Cymru will celebrate its 5th anniversary. In the same week, I will also celebrate my birthday. I want to capture this opportunity to launch a "Flash Fundraiser" for the day.

For the event, I will be live-streaming a talk on Wednesday 18 August (the day of my birthday) at 18:00-19:00, which is titled "Love, Sex, Identities: LGBTQ+ Histories". We will look at 6 objects from Museum collections to walk on a virtual tour of sexual orientations and gender identities in the past. You will be able to watch the live-streaming directly from this JustGiving page, and on my Twitch channel at: https://www.twitch.tv/alececca88

Glitter Cymru was set up in 2016 as a monthly meet-up group for people in Wales who identify under the following two acronyms: BAME, meaning Black, Asian and Minority Ethnic, and LGBT+, meaning Lesbian, Gay, Bi and Trans.

Glitter Cymru came about after hearing the frustrations of the BAME LGBT+ community of not feeling welcomed. Stonewall, a leading LGBT equality charity, found 51% of BAME LGBT people had faced discrimination or poor treatment from the wider LGBT+ community. This issue was found to be greater for Black LGBT+ people where the figure rises to 61%.

Please help us to meet our target of £500! Donate and share!

Many thanks and best wishes,