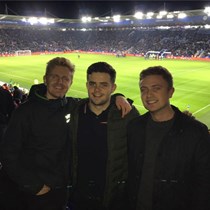 Thanks for taking the time to visit our page.

We are running the Derby Ramathon on June 3rd to try and raise money towards the 'Helping Hands' charity in Durban, South Africa'

During the World Cup in South Africa 2010, 150 self-funded volunteers came from the UK to combine their passion for soccer with helping the community. During the two weeks they were in Durban they did four building projects in the Valley of 1000 Hills (changing rooms for a soccer pitch at a children’s home, a four bedroom house for a children’s home, two blocks of toilets at a school and two classrooms for a new school plus seven soccer academies).

In October 2015 they returned to build a school in Durban.

This time around we're helping to raise £30,000 to build 10 Houses for families in need in the Valley of 1000 Hills, Durban, South Africa.

As well as physically building the houses the project with teach local people important skills and trades which will help their local economy to grow.

To follow the progress of the project on social media