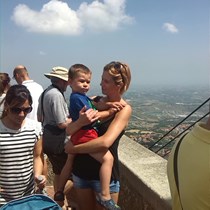 My name is Mia and I am raising funds for my incredible sister Alexandra for breast cancer treatment.

Here is my sister's story:

My sister is a wonderful single mum of a bright 7-year-old boy, which i will have to raise after my sister's death, and she is studying Biomedical Science at the University of East London. Alex chose to study Biomedical Science after being diagnosed with cancer in the hope that she will one day be able to help other sufferers of the disease. After being told that her tumour is inoperable and that her cancer will come back even if she does chemotherapy and being given no alternative options in the UK , Alex started researching other cases like hers that were successfully treated abroad.
At this stage anything that can help my sister have more time with her son is worth a try and I am asking for help to make this possible.
In September 2016 my sister was diagnosed with Stage 3 Triple Negative breast cancer, one of the most aggressive forms of breast cancer that has low survival rate and no targeted treatment available.
After the initial diagnosis in November 2016 she began a four-month treatment of chemotherapy leaving her almost crippled by the end of it.
In April 2017 my sister had a double mastectomy and after the surgery the doctors did not do any CT scans nor MRI but they gave my sister the all clear and NED (no evidence of disease) after the surgery.
In June 2018 she found a new lump in her armpit. She got anxious and went to her surgeon asking for it to be removed, but she was told that there was nothing to be worried about and been sent home.

From Sept to Dec 2018 numerous tests were done to diagnose the cancer. That is how much time the doctors required to be able to tell that her cancer is back, more aggressive at grade 3 and not operable.
Currently, after several rejections, we are truly grateful to have received an answer from a German hospital which agreed to operate Alex.