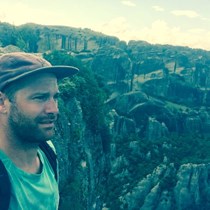 Weʼve raised £29 to help rescue abandoned, abused and neglected goats. And to care solely for the welfare of goats. Please sponsor me to run a mountain marathon

Iv chosen to help raise fund for the care of goats. Goats are near to my heart as they are my spirit animal. The spirit of goat has often helped me be guided to safety in the hills and mountains, so I feel it's time to give something back to the real goats of this world. Im running the Saunders mountain marathon for the first time in July and I realised its a great opportunity to raise awareness of the plight of goats in the UK.

Im raising money for Buttercups Sanctuary for Goats. Heres some info about them.

Buttercups Sanctuary for Goats was established by Robert Hitch in 1989 when he took in just two goats from the RSPCA. Before long goats who had been suffering from cruelty, neglect and starvation, or simply abandoned by the roadside or no longer wanted, began arriving in such numbers that the charitable status was sought in order to secure the long term future of the Sanctuary.

The Charities Commission gave this status in September 2003 and still today Buttercups is the only registered goat Charity in the United Kingdom whose sole aim is to provide relief to goats that have suffered or no longer have a home.