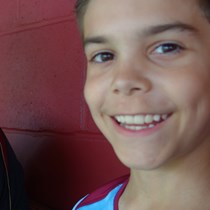 Pectus carinatum is a chest wall deformity that causes the breastbone to push outward instead of being flush against the chest. It is also known as pigeon chest or keel chest. It affects 1 in 1500 children.

When the chest wall develops, the cartilage that connects the ribs usually grows flat along the chest. In cases of pectus carinatum, this cartilage grows abnormally, causing unequal growth in the areas where the ribs connect to the sternum. This causes the outward appearance of the chest wall.

Who are we raising money for?

Our son, Alex, is 15 years old and is currently studying for his GCSE's. He has suffered with Pectus Carinatum severely since he was 12 years old. He suffers from pain and discomfort in his chest. He also suffers from a tightness with his breathing and has disturbed sleep due to his condition.

He has become very anxious about his condition and feels very self conscious about it. Alex will not take part in swimming and feels unable to allow strangers or friends to see his chest.

What are we raising money for?

Alex is currently under the care of St. Barts hospital in London. We have Three options...

1. Leave Alex as he is. Not a feasible option as He is understandably upset with his condition and does not want to suffer with this any longer.

2. Wait until Alex is 18 and has stopped growing and opt for very invasive chest surgery to correct the chest wall. Again not a viable option for two reasons, Alex would like treatment sooner rather than later and also there is no guarantee that the NHS would fund his surgery at 18. This surgery would cost upward of £5000.

3. Alex can be fitted with a T-joe bracing system to correct the deformity in his chest. The brace, which is made in America, is currently not fully funded by the NHS. It would have to be worn constantly for a whole year but has a very good success rate. We feel that this would be the best option for Alex, we can start treatment soon but we will have to help pay towards the cost. If we went private the cost would be around £4000 but with the NHS partly funding it the cost will be £1600.