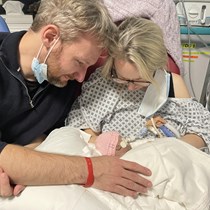 Cerys and Steve Hadwin-Owen is crowdfunding

Weʼre raising £5,000 to save babies’ lives through fetal medicine in memory of Alice Eira Hadwin-Owen, our precious, brave little girl.

On 3rd November 2021, Alice Eira was born by emergency c-section, eleven weeks before her due date. She was our second daughter; a much-loved sister for Annie Mai, and a little girl who brought us so much joy and happiness. She passed away in our arms at 5 days old, shattering our hearts into a million pieces but teaching us so much about love.

We knew during our pregnancy that Alice had some serious health problems caused by a rare genetic condition, but that there was a good chance she could survive these and live a happy, fulfilled life. With the help of the talented, compassionate doctors at University College London Hospital, we gave her every opportunity to do that, and she tried her very very best.

Alice’s middle name means “snow” in Welsh. Although originally chosen with her January due date in mind, we often think she was like a sparkling winter snowfall: everything about her was so beautiful, so perfect, and yet fleeting - there was just no way she could stay.

We have been fortunate to have been helped in so many different ways, by so many people. It’s clear to us though that what has made our experience tolerable is the world class care we received throughout our pregnancy from the Fetal Medicine Unit at UCLH.

Nobody chooses to step through the doors of the Fetal Medicine Unit at any hospital. Referrals are made here following signs of pregnancy complications, and the waiting room is devoid of the adverts for nappy creams and car seats that blare out of the TV in the Antenatal Unit; expectant parents anxiously wait in silence, hardly daring to hope they’ll ever need to buy either.

Despite having lost three pregnancies through miscarriage before having our first daughter, we were unaware of the existence of FMU until Spring 2021. At 10 weeks pregnant, an early scan showed that Alice had significantly increased nuchal translucency and skin oedema. These are signs of chromosomal and genetic abnormalities.

From the moment we stepped through those doors, we knew that whatever lay ahead, we were in the best possible place. Following an 8 week period of intense worry and invasive testing, Alice’s diagnosis was confirmed through a newly-available method of advanced genetic analysis, bringing hope that despite her rare genetic condition she may be ok. Our pregnancy could continue: we tentatively began to imagine the joy of having two little girls to raise, and were filled with hope that we may one day bring her home.

This period of hope was short-lived. In mid-October, Alice developed a life-threatening illness. We were informed that her chance of survival was now 50/50 and that two complex, pioneering procedures would need to be carried out on her while she was in the womb. Alice would certainly have died before birth without the swift and skilful intervention of the fetal medicine doctors, who saved her life with these operations, giving her every chance possible to survive in the Neonatal Intensive Care Unit when she was born too. The doctors also happen to be lovely, kind, compassionate people who approach their vocation with genuine sympathy. The significance of this cannot be underestimated.

In the end Alice was born too early and too unwell to make it. But those doctors gave her the best possible chance - and many parents have a much happier outcome than ours, thanks to their incredible skill, knowledge and expertise.

We want Alice’s legacy to be a gift to fetal medicine, to give other precious babies like her the chance to live.

If you would like to contribute to that legacy by making a donation, you can do so via this page.

(Once we know how much we can contribute, we will take the advice of our fetal medicine doctors as to where our donation will make the biggest difference. This may mean that the money goes directly to the FMU at UCLH - who work with others in the UK and around the world to share research and expertise, and to pioneer new treatments for unborn babies - or it could go to an organisation like the Fetal Medicine Foundation, who carry out similar work. We will update this page in due course so that all who contribute are aware of exactly how Alice's fund has helped.)