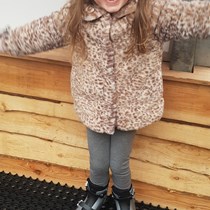 In October 2018 just before my daughter's 4th birthday she became unwell, on her actual birthday she started to struggle to walk and her left arm became weak. We were eventually admitted to hospital after misdiagnosis. Sophie had X rays, blood tests, examinations and a lumbar puncture and it was revealed that she had inflammation of her spine. This was why her left side was weak and she was unable to walk or raise her left arm. We had different specialists explaining that it was acute flaccid myelitis which no-one could tell us much about. Apparently its like 1 in a million, they had only ever seen one other case at the hopsital. We were told that Sophie would have a long road to recovery ahead of her and that it was uncertain about whether she would be able to walk properly or use her arm again. It was an emotional rollercoaster and Sophie was given IV steroids to reduce the inflammation on the spine. Fortunately for us, this started to work and she became stronger day by day. Since then she has had some obstacles to overcome and will always have weakness on her left side but we feel so lucky at how far she's come. We learnt about another young girl similar age to Sophie who also had AFM, Chloe. Unfortunately Chloe is still unable to use her arm, but like Sophie has overcome so much and is a little fighter. Sophie is going to run a children's fun run on May the 5th, this will be 1 mile. When I was in hospital with Sophie I could only dream of her running and dancing again, now it's a reality and we feel so blessed, I will be watching in awe as she does her run. All the money raised will go straight to Chloe to help her move her arm again.