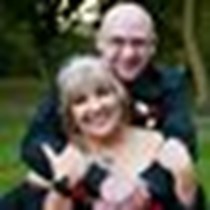 Robin is currently in a rescue in Spain. He's 4 years old and never known a loving home.

He's getting attacked by the other dogs in the pound because he's literally giving up on life so he's weak, he doesn't fight back and therefore a target. He's been isolated so his injuries can be dealt with but he won't last much longer there.

Saint Bernard and Big Paws Adoptions UK are making the arrangements to bring Robin to the UK as one of my closest friends has agreed to kindly foster him but of course it costs money to get him inoculated, micro chipped, fleas, ticks and worm treated, neutered, passport and transport. The charity isn't rich in money and usually ask for the costs to be paid in adoption fees but he's a male mongrel so would be difficult to find someone who could afford to pay the £280 to bring him over.

The quicker we can get the money, the quicker he can come to a loving home as time is running out for Robin. Even a donation of £2 will help him to be brought over.