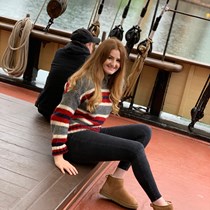 Weʼve raised £1,286 to help Alix get an electric scooter/wheelchair, to gain some freedom back

In April 2018, Alix went dancing to blackpool; unwell but wanted to dance regardless during dancing on stage she collapsed and got taken to hospital. After the most painful week of what began as “falling to sleep” turned into seizure like episodes. She was discharged from the hospital with a condition called Non-Eplileptic seizures and was told it would probably only last 3 months. During the next couple of months Alix’s condition started to get progressively worse, the ”seizures” became longer and more aggressive to the point where she spent a week and a half not being able to talk or even move.

She then got diagnosed with Functional Neurological disorder; a condition where your brain basically stops your body from working; this took a huge toll on her right leg. Which practically doesn’t work at all now.

Almost a year later of constant doctors appointments, hospital visits a final diagnosis was made of Postural Tachycardia Syndrome (PoTS) which is an abnormal increase in heart rate that occurs after sitting up or standing. Which typically causes dizziness, fainting and other symptoms. AND FINALLY ALL THE TESTING WAS DONE!!!

So now after an extremely painful year of not fully knowing what was going on Alix is now slowly getting by and getting better. But is desperate to get some of her freedom back; as she wants to be independent. As a girl that used to drive, go to the gym, dance 4 times a week and do everything that she wanted to have all that ripped away from her is heartbreaking. So now we are wanting to raise money to allow her to have a little bit more freedom to be able to take herself out, as she is physically unable to walk any distance safely.

any donations would be amazing and everyone will be SO GREATFUL to every small or big thing you put towards this. Most people know these electric chairs are very expensive. So anything will help with the cost towards it 💗💗💗💗💗💗

We are also planning on doing some fundraising events, so please keep your eyes out for these x

Any help would be hugely appreciated x