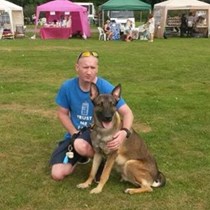 Weʼve raised £0 to take a vets practice to court

In Sept 2017 we made a complaint to the RCVS because we euthanised our standard poodle Toby after discovering that he had a tumour on his spleen.

The blood test done at the time we later found out that it was not charged and wrote in the records was tests stopped due to finances (Do you honestly believe that my wife having been told he had could have a tumour and saying couldn't afford a £150 blood test— did nothing at all, didn't ask for payment plan,didn't enquire about any help— because effectively thats what they said).

**I add that my wife NEVER said about money problems, thats just so easy to state without any proof. If we had money problems she would have at the very least asked for help. But she doesn't at all. I have said and will again.. THEY BLATANTLY LIED.. what was wrote is a lie and a cover-up, we knew nothing about what was wrote until after the euthanasia and getting the 1st copy of the records

(so DO a blood test, DON'T tell the owner the true results, DON'T charge for the test, THEN blame the owner for stopping further tests. (You can't blame me, I have a clear concussions-I KNOW that I am right).

(now I've worked for the last 18 years and 7 (at the time) of them are military and got a mortgage the year before-We owned Toby for 5 years and moved with him around the country but when we moved to the area, they are saying that we didn't care-because if my wife didn't ask for help then she didn't care).

A meeting happened (mysteriously the vet that was treating Toby was not at the meeting and the write-up is not truthful to WHY it happened or WHAT was said.

The meeting happened because my wife wanted to know why she and I weren't told, not what is wrote in the write-up so it's falsified (our witness says this), but the write-up points the blame at us and says nothing about the true reason.

My wife asked directly why she wasn't told, this is not even mentioned once in the write-up, a vet in the room and our witness backs that she asked.

I questioned about owners NOT being told about a diagnosis and I have a letter saying that she WASN'T told and supposedly why, but a few months later they told the RCVS that she WAS told (which is a blatant lie again), so they lied to the RCVS).

When my wife was told on August 3rd a vet says it’s got bigger, my wife says whats got bigger—a scan was done which confirmed the tumour (coincidently this scan data was not included in the records and we weren't charged for the scan either).

2 times we weren't charged for important and crucial information, 2 times we were not given the information needed. Do you see something here because I did. Don't charge..Don't tell... charge and you have to tell.

I also need to say that Toby was ill in January and was hospitalized for a number of days, what he had is NOT wrote in the record and my wife was NOT told about it, it appears some 10 months later in an RCVS statement. If we had known it was as serious we would have taken him back or when taken in May my wife would have said about it.

Toby's records are all over the place. (I mean it's said he is Brown when he was apricot or white--months after he is euthanised his records continued and were not closed down)

We got to stage 2 of 3 (so they didn't dismiss our case at the earliest point) and then the RCVS closed the case (this shows we have enough evidence for an arguable claim and then the RCVS took the easier option).

We then appealed the ruling and in July 2018 I was informed that they wouldn't move the ruling and the RCVS found no dishonesty (I showed at least 10 areas that they have been dishonest-including the lies that they told and the omission of key evidence and altering a letter twice, that was supposed to be sent to me)

So despite everything I have shown the RCVS they decided to protect the vets involved.

I am now left with anger and hatred inside about what happened and the blatant lies that were wrote. I paid for Toby's euthanasia even though literally days early its wrote we had money problems.

They took my money in February and financial problems is NOT wrote there nor is it wrote in ANY other pet we took to them. (we also had a dog spayed and again nothing about money problems), Only in Toby's and only in MAY and afew days before the scan..

Having done all I could do, I now have to pursue other means of redress myself.

They said that my wife was told about the tumour and then she did nothing, she didn't ask for help or payment plan.. nothing, which means they are saying that I did nothing.

I am truly gutted and have been since I uncovered everything. I will never forgive or forget and sooner or later, I will make them accountable.

I have too much evidence to just let it go, if I could give you only one bit of advice.

Get a copy of your animals records.

We were with them for only a year and they did this to us. Unforgivable..

They took our money and then LIED when the truth come out, the main vet that treated Toby even left the area and moved not just down the road to another practise but over 130 miles away.

I add that I didn't go with my wife to take Toby as I was working away at the time when he was ill. What I say is in the letters, records and statements given to the RCVS.

They kicked us out as I threatened them with RCVS and implied the 2nd copy of records looked diffferent (it does and only at one spot and only on that copy—worryingly with no explanation from myself otherthan saying “it looks different, an almost perfect explanation is given to the rcvs..no-one could guess so accurately).

so we went to the RCVS and guess what looked different.. the letter that was sent to me (my correspondence with....) was different in 2 places.. changed a word from sure to certain and took out the line I hope this addresses your concerns), and that 2nd copy of the records looks different to the 1st and 3rd.

Yet the rcvs found no dishonesty none, nothing wrong at all(omission of the scan data is dishonesty on its own, never mind the lies said against the letter sent to me).