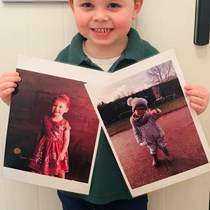 Weʼve raised £1,275 to help Anna Poppy access a trial for a very aggressive brain and spinal cancer by running a 1.5K mud run.

Logan is asking for your help to raise money for his friend, Anna Poppy, who needs access to the best trial for a very aggressive brain and spinal cancer.

Logan will be taking part in a 1.5K mud run on Saturday 18th May. Please sponsor his efforts and get this gorgeous, brave, strong girl, the help she needs.

She is just about to undergo a course of radiotherapy, for which doctors have only given her a 20% chance.

Please take the time to read her story and help Logan raise lots of money!

Since then we have been told that this means her cancer is now metastatic and very aggressive. The only curative option would be for full radiotherapy to the brain and spine for 6 weeks but there is only a 20% chance this will work. After that the nhs will only offer palliative care and Anna's life expectancy would be months.