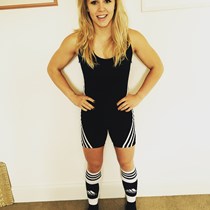 Weʼve raised £1,265 to help fund for me to get my butt to Boston and compete in the WORLD POWERLIFTING CHAMPIONSHIPS!

My powerlifting journey with the British Drug Free Powerlifting Association (BDFPA) has been a crazy, exciting rollercoaster. It's been 6 years since I was in the car accident that changed my life. The accident not only physically damaged me but mentally it consumed every inch of my body! Every hour of each day was a battle to concentrate on daily tasks, I had to push myself into social situations, force myself to smile and pretend that everything was ok. Today I wouldn't even recognise myself back then.

I started my. Powerlifting back in March 2016, taking part in my first powerlifting event in July 2016... this lead to smashing the British National Championships in February 2017 and placing 2nd in my weight and age category as well as setting a new British record for Bench press.

Following this I was then personally selected along with 11 of the best powerlifters in England to be a part of the official England team. With the England team I was fortunate enough to travel to Ireland in July 2017 to compete in the 4 Nations Championships against Ireland, Scotland and Wales where once again, we as a team brought home the trophy as the winning team!
Following this, I have amazingly been given the opportunity to progress onto my ultimate goal which is competing in the WORLD Powerlifting Championships. This is being held in Boston USA on the 4th of November 2017.

For me to be able to achieve this I need support with funds as powerlifting is not yet a well-known sport and unfortunately funding is not available for the athletes taking part. Now since this is my dream, my goal and my one true passion, I literally eat, breath, live and train for powerlifting I’m going to do whatever it takes for me to get to Boston and to compete amongst the worlds best powerlifters. Living the dream.
I need your support, I need people to get behind me and I know many generous faces and I hope you guys can see what this would mean for me...

It's soppy I know but this kind of shows that anything is possible and if you want it enough, you just go and get it! Let's make this year count.

6 since I was in the car accident that changed my life, I had to force a smile and pretend I was ok. Looking back I wouldn't recognise myself. How I can be so dedicated to training?.. all I can say is that finding Powerlifting has been the best thing to ever happen to me!