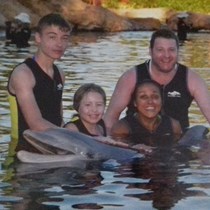 Weʼve raised £70,820 to Amber's Appeal - We are fund raising money for alternative treatments in Europe and outside the EU to fight this disease.

In September 2011 when Amber was 6 years old she was suffering with head aches we found ourselves going back and to, to the doctors and Warrington Hospital and being sent home telling us it was migraines and to give her Calpol.

She then started to feel serverlely sick and dizzy, so we went back to Warrington Hospital to see a doctor we had not seen before, he carried out the same test but was not happy and sent Amber for an immediate MRI scan on 16th November 2011, the results of the scan revealed within an hour that there was a lesion on the right frontal lobe the size of a small orange. Within 2 hours of receiving this devastating news we found ourselves in the back of an ambulance with blue flashing lights on being rushed to Alder Hey. We met with the neuroloigist team at Alder Hey who informed us that Amber needed an emergency brain craniotomy brain operation on the 18th November 2011.

Amber recovered from this operation amazingly and was extremely brave, she was discharged home on the 22nd November 2011. We then received the devastating news on 24th November 2011 from the histology report that Amber had a very rare brain tumour and was the first child in the UK to have it. We are not going to go into the history report in too much detail on this story, and expand on daunting words on here, because as parents for the last seven years if there is one thing we have done it is to try our best to take the worry away from Amber.

Amber received 30 doses of radiotherapy going to Clatterbridge every day for 30 continual days, also receiving at the same time she had temozolomide chemotherapy and six months of maintenance dose of temozolomide.

During this period Amber breezed through the treatment with no serious side effects and still continued going to school and having a normal life with her family and friends, which blew us all away with her courage, strength and bravery.

Amber had 3 great years, we pre booked for February 2017 Disney Land America for a surprise for the 5 year all clear scan.

On 20th December 2016 the scan revealed the devastating heart breaking news of a recurrence of this disease.

Amber had to go through another craniotomy brain operation on 4th January 2017 which was an 7 hour agonising operation.

Amber received another 30 doses of radiotherapy again going to Clatterbridge every day for 30 days and also received chemo wafers this time.

Amber once again bounced back only having 5 days in hospital and was home with no side effects, even after receiving another 30 doses of radiotherapy.

We even managed to still surprise Amber and still take her on her dream holiday to Disney before she started the radiotherapy.

Routine scans continued again every 3 months. We found ourselves again after trying to maintain and live a normal life with Amber on 31st July 2018 with more devastating heart breaking news from the scan of another recurrence, which meant her 4th craniotomy brain operation on 6th September 2018.

I have personally done a substantial amount of research during these last 7 years throughout this horrific journey and spoke to other doctors in other countries and families who have been in a similar situation and have travelled to other countries.

We now believe and have decided that there is alternative treatments with no toxic side effect out there for Amber in other countries.

Germany is one place that can and is wiling to help Amber with a treatment called immunotherapy with no toxic side effects, unfortunately there is a significant cost implication for this to happen, which is why we now find ourselves in this situation to desperately raise as much funds as possible for this alternative treatment which could start in less than 3 weeks for Amber to help fight this disease.

The fund raising will also help towards the costs of living in another country for a possibility of up to a month at a time and will also assist with our UK personal bills. Joanne is part time and is now currently off work caring for Amber since her recent operation and I myself is a self employed tradesman who is doing the best I can to continue to work to support my family, which is becoming more increasing difficult day by day. We also have a 17 year old son called Reiss who will be staying at home with friends and family when the treatment starts.

Costs we are looking at are as follows:

Flights for 3 people return are average £200 per visit

Treatment for phase 1 is £26,000 and this will be an ongoing treatment plan for Amber , as well as continuing to seek and research alternatives options around the world to keep Amber from having another recurrence.

Amber is a true inspiration to everyone that knows her and has dealt with this whole nightmare of a journey amazingly well. She never moans or complains and just deals with everything that is thrown at her, she gives me and her mum the inner strength to carry on and to keep positive.

If you want to be one of Ambers angels no matter how small anything would be greatly appreciated to make this next journey happen for her.

I will continue to update this page with our progress

Thank you from Daren Joanne and Reiss and Amber xxxx