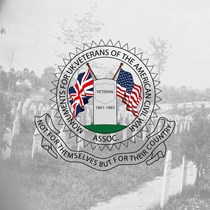 Weʼre raising £3,000 to Create a memorial for Veterans of the American Civil War, who died in the United Kingdom.

Our mission is to secure at least one monument for American Civil War Veterans buried in the United Kingdom, (UK) and where possible obtain individual headstones for veterans too.

Surprisingly despite many people from the UK serving in the American Civil War, and the interest that people have in that period of history,, there is no single monument in the UK to remember ALL veterans. There are a couple who name just a few.

We feel that that should change - all Civil War veterans surely should some form of remembrance. Men and Women returned to the UK after the conflict with nothing more than the thanks of a grateful nation, but they carried with them mental and physical ill-health burdens related to their service.

Many lived in poverty, often in workhouses, and relied on the goodwill of peers who had served too, One veteran was John Davis, a London City Mission worker, and former veteran himself. John managed to connect over 100 former veterans living across London. He formed the London Branch of American Civil War Veterans in 1910 for peer support, fellowship and to share experiences.

The London branch veterans were successful in helping to secure for some their Federal Pensions. However, despite their success many were still buried in unmarked plots,. For example, until recently despite their "London Branch" work after the war, its founder Ensign John Davis and member Major Seth Herrick did not have any headstones to honour their service. We aim to carry on where they left off - we plan to honour them and all other veterans who returned to the UK.

What will your donation help with?

To pay for construction costs of one single monument. We will not be naming individual veterans, but rather seek to recognise veterans as a whole. What they faced on return to the UK, their struggles etc. The memorial will be designed to allow individuals to place "time capsules" inside with any particular veterans or units names. "Known only unto them". To accompany our mission a book will be published naming as many veterans that we can identify.

What will it say on the Monument?

The following wording has been agreed, and initial artwork is being prepared by an artist and member of the Sons of Union Veterans of the American Civil whose ancestry shares .people who served on both sides of the conflict.

“We have shared the incommunicable experience of war, we have felt, we still feel, the passion of life to its top. In our youth our hearts were touched with fire” (Oliver Wendell Holmes Jr)

"Let no wanton foot tread rudely on such hallowed grounds. Let pleasant paths invite the coming and going of reverent visitors and fond mourners. Let no vandalism of avarice or neglect, no ravages of time testify to the present or to the coming generations that we have forgotten as a people the cost of a free and undivided republic.

"If other eyes grow dull, other hands slack, and other hearts cold in the solemn trust, ours shall keep it well as long as the light and warmth of life remain in us."

What are the costs involved?

We estimate our target of £3000 is realistic, but recognise more unforeseen costs may be incurred. We will seek to fund the project from fundraising and donations, it is not backed by an official body. We are completely non-political in terms of our project aims. Inclusion is important to us, without judgement, we seek to simply remember and honour people, who have been forgotten in the mist of time. The first monument you are helping to fund will aim to be London based, as in essence whilst veterans are buried across the UK, many returned to the Capital city, and through research have often been easier to find.