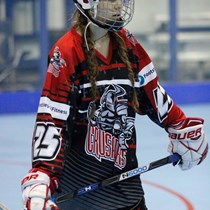 Weʼve raised £30 to help Amy have the opportunity to travel to Barcelona to represent the GB Senior Women’s team in the World Roller Games! 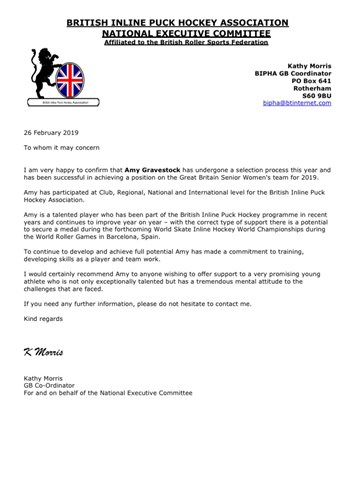 I first put on roller skates when I was about 4 years old, so I grew up loving all types of skating (including aggressive skating, freestyle skating, and ice skating).
In my teens I started attending a rollerdisco and soon became a skate marshal at the Starlight Roller Disco, which I am still involved with. I’ve also been an ice marshal at the Brighton Pavilion Ice Rink.
In 2016 I started roller hockey, and within a couple months I was playing for the Brighton hockey team, as the only girl on the team.
At the end of 2016 I was invited to play for a women’s team and represent the south of England in an elite league tournament, just missing out on playing in the final.
In 2017 I started playing for the Brighton senior team. And I’ve been very fortunate to be mentored by some brilliant hockey players.
In 2018 I represented Team GB’s junior women’s hockey team in Asiago, Italy. It was an experience I will never forget; the bond within the team grew as the competition went on and being able to meet players from other countries on and off rink was lovely.
This year I was lucky enough to make the GB’s senior women’s team. We will be travelling over to Barcelona in July for the World Roller Games.
There is quite a big cost within this trip, as I have to pay for flights, accommodation, meals and some team kit. My parents are supporting me as much as they can with the cost, but I still have quite a way to go, so would greatly appreciate any little donations to help me achieve my goal to represent Team GB in Barcelona.