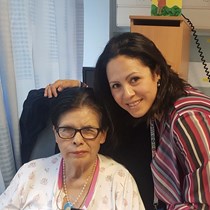 After nearly 3 months of battle to get a tourist visa from Venezuela, my mother arrived in the UK on the 10th April. The plan: a 24-day holiday in the UK, especially to spend time with her granddaughters who she hadn’t seen for nearly two years!
Half way through her stay, she suffered a stroke! She was quickly intervened and doctors performed a thrombectomy and removed most of the blood clot in the left side of her brain, which I believe was key not only to save her life but to help the amazing recovery she has had. She received this treatment at the Royal London Hospital and was transferred only 4 days later to the stroke rehab unit at Homerton Hospital. Ready to be discharged from Homerton Hospital after 5 days, doctors detected at the last minute she had a pulmonary embolism. In the end, she left Homerton on the 7th May.
These treatments do come at a price and, as per recent UK government rules, NHS hospitals have to charge overseas patients at 150% of the tariff to UK/EU patients.
We are extremely lucky she had the stroke here where she received outstanding care, instead of in Venezuela where the outcome would have been completely different if not fatal. Yet, my mother has two astronomic NHS bills to pay. As a non-UK resident, she is not entitled to the care she received, yet nobody asked her for a credit card or insurance before caring for her.
Although most overseas visitors in her position would not pay the bill, as it is financially impossible, we would like to do everything we can to pay them because we will be forever grateful for the fantastic care my mother has received by two NHS hospitals and their wonderfully caring staff, and also because not paying would mean never be allowed back in the UK and refused a settlement application if we were ever to request it.
It is extremely difficult for us as a family to ask friends and family to for this financial help, but considering the circumstances we are appealing to your kind heart to support this cause.