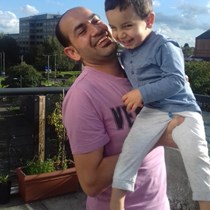 Weʼve raised £7,780 to help Anas convert his Syrian dentistry qualifications so he can practice in the UK.

My name is Anas Shoydab and I am a refugee from Syria. I am 29 years old. I was forced to flee Syria in 2015, five years after the war started and it became too dangerous to stay. After graduating from the University of Damascus, I worked as a dentist for four years in my home town near Damascus, but life became impossible, with bombings every day.

In July 2015, I left my wife and 45-day-old son in Syria in search of a safe place for my family. The journey was long and perilous; through Lebanon, Turkey, Greece, Macedonia, Serbia, Hungary, Austria, Germany, France (Calais) and finally to England. The majority of the two-month journey, I made on foot, with occasional bus rides and terrifying boat crossings, including one from Turkey to Greece in a small boat, overcrowded with desperate people escaping war.

My journey didn't stop when I arrived in the UK. After a period moving from Dover to Croydon and then Heathrow, I was moved to a hostel in Cardiff and then onto refugee accommodation in Newport. I n January 2016 I was granted 'Leave to Remain' in the UK. With the help of a Norwich man John, who opened his house to me, I finally settled in Norwich, the city which has become my home for the last 18 months. My wife and young son joined me 11 months ago and in August this year our second son arrived.

I know that my skills as a dentist are in demand here in the UK. I am keen to get back to my profession as soon as possible, not just to support my young family and the people I have left behind in Syria, but also to give back to the country where I have made my home and contribute to the National Health Service.

The next step is to pass the Overseas Registration Exams (ORE) from the General Dental Council (GDC). I have been accepted onto a Masters course at Queen Mary University in London which will help me to convert my degree and allow me to start working as a dentist here. I am fundraising for the fees which are £22,300.

Thank you for reading my story , I appreciate every share with your friends and family and every contribution, small or large.

Read more about Anas in the Eastern Daily Press.