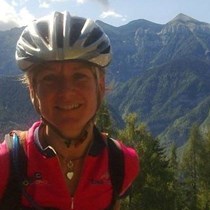 Weʼre raising £2,000 to distribute among a range of charities associated with the death of my husband, by doing a winter swim challenge 🥶

My husband Paddy died in July having been diagnosed in April with Pancreatic Cancer. For a few years, Paddy had done the Christmas Day morning swim at Newcastle Harbour...but that once a year dip was it on the cold water front, until August 2021 when he began dipping regularly and even sought out swim locations on Staycations in Ireland. When he saw me do the Polar Bear Gold swim challenge November 2021 to March 2022, and himself had come to love regular cold swims rather than dips by February 2022, he decided that he was going to enter Polar Bear Gold swim challenge from November 2022 to March 2023. Little did we know that only a few weeks after he decided he would do the challenge, he would suddenly become ill and get a swift, shock diagnosis. Not even living until winter, never mind doing a winter challenge. I wasn't going to do Polar Bear Gold again this year, simply because I'd already got the tshirt (or swim cap in this case) but a few weeks after Paddy died, around endAugust, I decided I would do it again this year ...for Paddy because he isn't here to do it...and because the sea was important during his short, shock illness. Paddy continued to cold water swim after diagnosis until 2 weeks before he died. Those couple of months of swims were the only pain relief he got from his symptoms. And the sea, important to him in his childhood years, were unequivocally important to him in his final years. Just 6 days before he died, when nobody else would have been getting out of bed, he asked "would you drive me to be at the sea for my last time?". Polar Bear Gold 2022/23 let's be having you 💪❤️🥶