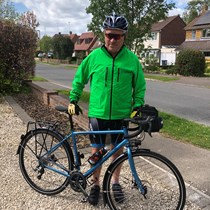 Three years ago I met a group of young people at the bar of our local pub. They were there following the funeral of their school friend Cameron Forster. A former Hurst College student, he had tragically died on April 30th 2016 with a fellow RAF student pilot. I was moved and impressed by the dignity of his friends. When we later heard that Cameron’s mother, Amanda, had donated his estate to build an orphanage attached to a school in Zambia, I decided to do a small concert with my sister. This helped fund the roof. The orphanage has been built by volunteers and now enables orphans in the village of Mkushi to attend the Itala School. They are now building a creche where toddlers can go whilst their siblings- who care for them- attend school. This is a small, tangible charity run by family and friends, in memory of someone we never knew but who has left a wonderful legacy. The children it supports rely entirely on charitable funding.

I have decided to take two weeks off work at the end of June, don my lycra and cycle from Lands End to John O’Groats. Particularly looking forward to the west bank of Loch Lomond where I can look up at Ben Lomond- my wonderful mum’s final resting place. She would have been delighted to support these children and that the journey ends in the hills of Scotland! Anything you can offer in support will be gratefully received. Thanks A x