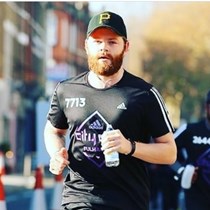 On May 26th I ran the Edinburgh marathon (!) and I'd really like to help Cody (pictured) walk an ordinary, pain-free life by fundraising to support the cost of the surgeries he needed to correct severe patella luxation and prevent potential paralysis.

Whilst trying to be realistic with a target, I want to raise as much as possible as there's no figure on this puppy's health :) My sister Ally also smashed the half-marathon on the same day!

Cody is my brother's 8 month old blue roan Cocker Spaniel. After noticing that he doesn't walk right (& simply refuses to jump even for a treat) he was taken for a check up resulting in xrays & consultations.

It turns out that Cody has very severe patella luxation in both his knees, meaning that his knee caps are in the completely wrong place and thus requires a special orthopedic vet to perform surgery on both hind knees.

During an initial surgery to fix the issue, the vets discovered that he has no groove at all for the kneecap - & therefore needed prosthetic grooves put in, meaning an additional 2 (very) expensive surgeries.

He also had a fracture on his shin from the stress of the knees up until now alone... :(

Whilst Cody does have insurance, unfortunately even the maximum doesn't come close to the total cost of his consultations, xrays, surgeries, prosthetic implants and general recovery.

By donating absolutely any amount, you'll be directly contributing to his recovery, and I can't express how grateful I (and Cody!) am for the support.

He's an absolutely wonderful, happy, loveable puppy and a joy to be around.
He's also got the perfect parents in my brother Iain and his girlfriend Maria Grazia... and whilst they of course would do anything for him, I want to use this opportunity to provide support.

They also have no idea about this page!

Thanks so much for reading! Any amount given truly makes a difference! Promise visits and a trillion puppy cuddles in return for the support :)