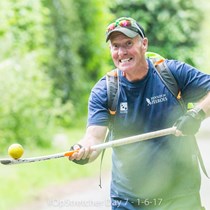 In 2012, I invented a new hockey activity to raise money for charity, extreme Hockey dribbling. So far, I've completed the London Marathon (2012), the 3peaks, (2014), and dribbled a ball from Cardiff to London supporting Hockey4Heroes (2017). 2019 sees the toughest challenge yet!

In July 2019, I will be participating in Operation Olympus, a groundbreaking attempt to take hockey to the Himalayas and set a record for the highest game of hockey! I will be attempting to dribble a ball up to a height of 17,345 feet on the Annapurna Range. Without doubt, this will be the toughest physical and mental dribbling challenge I've faced. This is a fantastic expedition in collaboration with Hockey4Heroes, Lincoln Minster School and Gary Johnson of Hurricane Sports.

I'm raising funds for two very deserving charities. I'm an ambassador for Hockey4Heroes, we support Help for Heroes and give our injured service personnel the support they deserve.

I'll also be supporting Lewis Whele, aka 'Lewis Little Legs'. Lewis suffers from Cerebral Palsy. Jim and Toni, Lewis's parents are seeking to raise funds for Lewis to undergo a life changing operation to enable him to walk. The financial commitment to the operation and subsequent physiotherapy is in excess of £50,000. He is an incredibly positive and enthusiastic little boy.

During Operation Olympus, along the way, we'll be stopping at schools in the Himalayan foothills and introducing the local children to hockey with coaching and games, following up with the supply of hockey equipment.

Please help Hockey4Heroes and Lewis Little Legs and support me as I embark on the toughest hockey dribbling challenge yet.