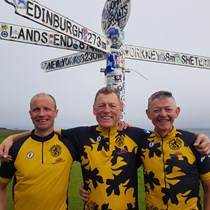 Weʼve raised £5,282 to help support Balerno High School send students to help build a small home for a family in poverty in Tanzania

Wouldn’t it be great to cycle Lands End to John O’Groats sometime someone suggested on one of our Fietsclub Sunday outings. That’s about 1,600km (1,000 miles) with at least 17,000 metres (58,000 feet) of climbing - about twice the height of Everest! Who would be foolish enough to take that challenge on! As if it’s not tough enough it has to be completed in 7 days!

Well it turns out that a few beers in the Grey Horse was enough to expose Andy Hoggarth, John Grindley and David Heneghan as that foolish. On July 6th, 2019 the three will begin their attempt to complete the route. In preparation they will attempt a “trial run” known as “STJOG” (Stranraer to John O’Groats) at the end of May in 3 days to test the bikes and the legs.

While every muscle will ache for the 7 days some great charities will benefit. The aim is to raise at least £10,000 for two great causes both of which are have strong relevance to the three of us and to Balerno.

The first is Aspergillosis an illness caused by a fungus that for those with it can be extremely debilitating.

The second is to support S4 and S5 students in Balerno High School who are travelling to Tanzania in June 2020 with the Vine Trust. They will help in the construction of a small individual home to support a family living in severe poverty in a village. Tanzania is a country where more than 36% of the population live below the poverty line.