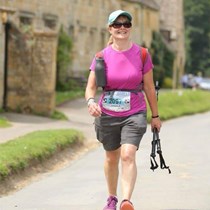 I met Karen whilst we were pregnant with our first born 25 years ago. We have recently both celebrated our first born having children of their own and whilst this should be a very joyous occasion sometimes mother nature can take a cruel turn. I am trying to raise money for Karen's granddaughter whose story you can read below. I'm taking part in The Threshold Series Race To King Ultra Marathon along The South Downs Way starting at Arundel and finishing at Winchester Cathedral on 22nd-23rd June 2019 . That's 23.4 miles on Day 1 and 30.2 miles on Day 2. TOTAL 53.6 miles, a hard slog but hopefully I can raise money for Ellie along the way and that will keep me going.

Ellie caught a normal winter bug at the beginning of February 2019. Her symptoms consisted mainly of a high temperature and diarrhoea with occasional sickness. Although she was poorly she was happy and playing as usual and we treated her with Calpol every 4 hours.

On the 9th February I noticed Ellie felt a lot warmer than usual so I checked her temperature which was reading 37.6. Our ear thermometer hadn’t always been that accurate so we gave her Calpol as a precaution and I sent Dad out to buy a non touch digital thermometer. When we re tested her it has risen to 37.8 and we both began to worry. We phoned out of hours GP and took her to Nevil Hall Hospital in Abergavenny to see the Doctor. He checked all the usual observations, her temperature was down to 36.6, her chest sounded normal however her blood sugars were slightly high but he said he wasn’t concerned and sent us on our way. Later that night I checked her temperature again and it was still reading extremely high and she didn’t seem completely herself so Dad phoned the Emergency Paramedics out to assess her. The Paramedic that came again checked all the routine observations which all looked ok and after an hour he left with no concern.

The Day Our Lives Changed Forever.....

On the 10th February 2019 Ellie was just get ready to go to bed. She cuddled in with a bottle and began drifting off until Her aunty came in from work. Ellie was excited to see her and climbed down off my lap to play. Everything was normal... Ellie was shouting and laughing and crawling around. Her aunt grabbed the bubbles from the shelf which Ellie mistook for the Calpol bottle which she hates and she started to cry. Her Aunt lifted her up and hugged her to sooth her. I looked up and all of a sudden Ellie's head flopped back. “There's something wrong I screamed, she’s not breathing. "Nan leapt up off the sofa, laid Ellie on the floor and began CPR while I phoned the ambulance. She managed to resuscitate Ellie twice before the Ambulance arrived thanks to the Paediatric CPR training she strangely only received a week prior. The Welsh Air Ambulance Doctors arrived via road and sedated Ellie in the back of the Ambulance putting two IO’s in through the bone in order to get the medication in quickly. They saved her life.

We were rushed to the Paediatric Intensive unit at Noah's Ark Children’s Hospital in Cardiff where within 30 minutes of admission Ellie suffered another Cardiac Arrest. The doctor came in to the waiting room and told us “they are currently doing CPR on Ellie, It’s not looking good”. We decided we wanted to be with her and sat praying while we watched the Doctors perform CPR for 15 minutes. 5 shocks were then given and finally her heart went back into a safe rhythm. They had saved her life again.

She remained stable for a few days under paralysis and sedation with Doctors Puzzling over what the cause could be. All her tests came back normal and they began sending daily ECG’s to the heart specialists at Bristol Children's Hospital. The Doctors were all puzzled, in their 20 +years of experience they had never encountered this type of case.

They followed the normal tests up with a MRI and that’s when the BOMB hit us. They took us to a private room and explained due to the starvation of oxygen her brain had encountered during the 15 minutes of CPR she had severe damage to both sides of the brain. They did stress they didn’t know how this was going to affect her and only time would tell of her ability to move, talk, see, hear etc.

We were devastated but hopeful of getting some of our little girl back. After 5 weeks at Cardiff we were transferred to Bristol Children's Hospital for testing. It came back Positive for Brugada syndrome, a rare heart condition and even more rare in children especially babies.

On the 25th March Ellie underwent surgery and had an epicardial pace maker with a subcutaneous coil fitted (ICD) in her chest. There are no known cures for Brugada and this is the only treatment available. It is still very new and under experimentation but we want to spread the awareness of this condition.

Ellie has began recovery well, and is showing neurologically that she hasn’t been dramatically affected by the brain damage. She is speaking as normal and every day her movement is progressing. She can now sit up and roll over and it wont be long before she re gains the ability to crawl as there is nothing holding our little fighter back.

Help raise awareness of this potentially life threatening condition and help Ellie along the way.