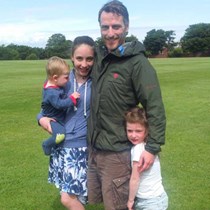 Weʼve raised £16,958 to be part of the bigger 100K effort to pay for my old friend Claire Bothwell to receive pioneering treatment for her stage 4 cancer.

I am running the Glasgow half marathon to raise funds for treatment for my dear friend Claire Bothwell. This is just part of a bigger campaign on gofund me to raise a whopping 100K.

I first met Claire nearly twenty years ago when she came down from Aberdeen as my replacement as a researcher on the BBC's Frontline Scotland (it's OK, I was leaving anyway) and I had to show this seemingly quiet and studious type the ropes. She mentioned she hadn't found a flat and as luck would have it, I knew someone with a spare room. So we ended up becoming friends and I soon realised beneath that timid exterior was a wicked sense of humour and a fun loving party animal.

Since then Claire has had three wonderful children with her fellow ginge and all round good guy, Liam, who has also become a close friend and my wife Victoria married them both during the summer (she's a celebrant, not a polygamist).

Last year Claire was diagnosed with bowel cancer and after surgery to remove the tumour it looked like she was in the clear. Unfortunately, tests showed it had spread to her lungs and despite getting 9 months of chemotherapy and five tumours removed from her lungs in the summer two more tumours have already appeared in her lungs. She has now been told it’s probably incurable.

As if that’s not unlucky enough Claire has also been diagnosed with a second unrelated cancer - lymphoma. Having two different cancers excludes her from taking part in most trials so she is going to have to pay for any experimental treatment herself.

The good news is there is a new form of immunology called TIL therapy that could save her life. The treatment is at a very early stage and therefore it’s hideously expensive and not available to Claire on the NHS.

Her best option now is to try and raise funds to be treated privately in America or Europe.

So if you can spare even a couple of quid, Claire, her family, her friends and myself would be massively grateful.

All proceeds will be going to a fund shortly to be set up to help Claire and anything left over will go to Cancer Relief – until then the money will be as Father Ted says, resting in my account but this page will keep a record of all pledges.