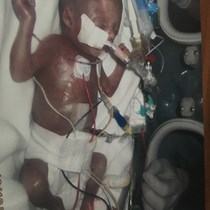 Weʼve raised £1,400 to To fund further rehabilitation for Jakub in order for him to have a chance to start walking in the future and to fight his disabilities.

Hey, my name is Jakub and I was unexpectedly born prematurely in only 23 weeks. My mum Anita would like to share my story with you.

On the day Jakub was born our life changed completely. He was having to fight for his life immediately from the first minutes of his life. This was a huge shock for all of us. He was tiny and only weighed 650 grams. I could easily hold him in my palm of one hand. Jakub suffered two brain haemorrhages in the first couple of days of his life which damaged his brain irreversibly. He also suffered a necrotising enterocolitis with stoma. During his long stay in the hospital which totalled a very long 155 days or 5 months he had sepsis which he recovered from well. every day we were frightened about his life. he has had a few laser treatments that have helped a tiny bit. Another fight was being battled for his vision. Jakub can now see in black and white from about 20cm distance. He has to wear very strong glasses to help his vision. Unfortunately he will have to have another eye surgery in the future. Our son also suffers from epilepsy and has had a few seizures. However he was always a very brave ad strong child.

Jakub is a very happy 5 year old boy that enjoys going to school and participating in a variety of activities and games particularly swimming despite his struggles and barriers due to the disabilities. We love him so much and do not imagine living without him. Jakub has gone through a professional rehabilitation camp in Poland in the rehabilitation centre of Polanika, this was a very good experience for Jakub as it was much more intensive rehabilitation over a 2 week period which allowed further techniques and improvements to be used and made, however without further rehabilitation on the same idea and intensiveness as Polanika Jakub will be stuck in his developmental stage whereas with more opportunities like the last camp this gives him a higher chance and more hope of being able to over come his barriers and disabilities and achieve things that seem virtually impossible like walking in the future. as well as the rehabilitation Jakub will have to undergo a hip surgery in the future to realign his hips and strengthen his muscles and joints in order to be able to support his body to have a chance of walking. with a combination of the two Jakub may achieve and overcome great things.

We would like to ask all the family, friends and people with a good warm heart for any size of a donation to go towards Jakub's further rehabilitation, as every penny counts. We will be so grateful for any kind of donation. As well as this we could provide updates about Jakub's progress for people who would like to know.

Anita Jakub's mum. this would really help fund Jakub's further intensive rehabilitation and promote the fight with his disabilities