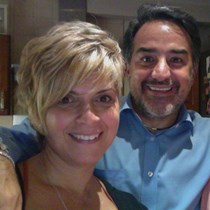 Weʼve raised £1,100 to Celebrate the life of "Nonna" Maria Sadurni for a bench in her memory in Kneller Gardens

Here’s where it all began:

Nonna Maria become a widow to her darling husband Giuseppe who died in 2011 due to prostate cancer. Within a few years of Joe’s passing she too was diagnosed with Colon Cancer back in Dec 2014 and underwent a major operation which took place in February 2015 in the attempt to remove the cancer which required a long recovery… Thank goodness, this intervention turned out to be a success.

In the months that followed during her recovery the loss of her husband started to have an effect on her well-being making her feel very lonely and depressed so we thought it would be a good idea to move her over-to the UK to live with myself and my husband (her son) and our 3 daughters Maria-Christina, Elizabeth and Liliana in September 2015.

In no time at all Nonna began her new life here in Twickenham and she became a big part of our family. She was such a character and had such a big personality she was always a joker, always had a smile on her face with an infectious laugh. She truly had a passion for life. She enjoyed going out to the shops and always taking part in our family outings. Her true passion was going out for really long walks in Kneller Gardens whatever the weather. She always amazed me though her English wasn’t great she’s managed to make conversation and build so many friendships over the years where she was soon welcomed by all and huge part of our community.

Nonna particularly loved to cook, sew, knit, crochet, garden and loved dogs... and did she ever have such a soft spot for our family dog Armani and how he loved her too. Everybody knew Nonna in and around the community, especially when they heard her coming a mile away with the click of her walking stick waving it about saying “Gooda Morning” (in her broken English) to whoever she encountered.

Just before Christmas 2018 she suddenly became ill. After 3 months of doctor appointments, X-rays, blood tests, ultrasounds and MRI scans, the results after two weeks of anticipation finally came back, unfortunately they came back positive.

We were told that in fact, she had a tumour and that she needed to be admitted into hospital straight away to perform a biopsy so that they can identify if it was indeed cancerous or not and if so what stage etc. Within 24hrs we were told it was in fact secondary stage 4 colon cancer that has metastasised to the base of her spine called adenocarcinoma. She was given a timeline of 6-12 months. We were all so shocked and devastated, our hearts were broken by this terrible news.

At this stage, the treatment plan offered was 5 days of Radiotherapy, which took place at the Royal Marsden hospital in Sutton. It was hoped this treatment would give her a chance of regaining some kind of quality of life. Following her agreement, we began this journey. It was all proceeding well but unfortunately within 24hrs of the last treatment the radiation began to take Its toll on her well-being and suffered quite badly with the side effects. In the weeks that followed though she maintained her humor and outlook her symptoms progressed in such a way that caused her terrible pain and she began to deteriorate rapidly.

I remember that dreaded phone call during the early hours on Friday morning where the doctor advised us to get to the hospital and to call all family members to advise them that she had taken a turn for the worse. Luckily myself, my husband and my 3 girls made it in time. We were all able to be there with her, watching her fade away before our very eyes until she took her last breath which was one of the hardest things we as family had to endure. Sadly, that afternoon at 2:25 pm on Friday the 3rd of May Nonna passed away peacefully, it was 3 weeks to the day and to the hour of her final treatment. Nonna was a special mum, a special wife, a special grandmother, a special mother in-law and a special friend. She will be truly missed.