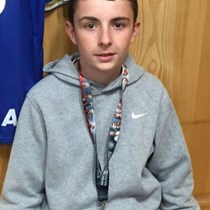 Weʼve raised £635 to help support Maria , Owen and their family with costs incurred during Owens long stay in hospital.

We have set up this crowd funding page in support of our friend and colleague Maria Mathieson and her son Owen who spent 10 weeks in Edinburgh's Sick Childrens Hospital . Owen developed a subdural empyema (abscess on his brain) and had to undergo an emergency craniotomy (removal of part of his skull to expose the brain and wash out as much infection as possible). During this time Owen developed a right hemiplegia (paralysis of the right side of his body). He also developed pancreatitis and a severe skin rash due to the strong antibiotics he was prescribed through a hickman line inserted in his chest. Owen now has titatium screws fixed to hold his skull in place and is unable to take part in his beloved sports for at least 6 months. He is a keen footballer who plays for East End and also plays badminton for Wick and Caithness.

We as Caithness folk know only too well the costs involved in making trips to Raigmore due to emergency treatment and appointments never mind being in Edinburgh for 10 weeks!! We would love to raise some money to help Maria, Owen and their family cover some of the costs incurred whilst being away for such a long period of time. Please donate if you can. Thank you xx